Maynard Moose, Willy’s famous comic sidekick, is proud to announce that his new book — “The Little Moose Who Couldn’t Go to Sleep” — went on sale March 1, 2014.

Maynard is the author of three award-winning children’s books: “The Bully Goat Grim”, “Rapunzel and the Seven Dwarfs”, and “The Uglified Ducky”. He can also be heard on a variety of audio CD’s, most notably “Maynard Moose Live From the National Storytelling Festival”.

The only authentic Native American Moose currently on the festival circuit, Maynard is the last known teller of ancient Mother Moose Tales. Preserving this oral tradition has been his life’s work. Maynard and Willy have been traveling and working together since 1977.

“The Antler Is Blowing In The Wind.”

A Chair at the International Storytelling Theater in Jonesborough has been dedicated in Maynard’s honor(made possible by the generosity of moose fan, Phil Straus) 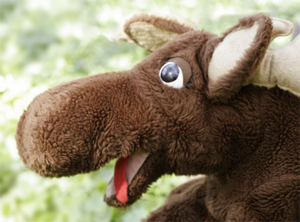